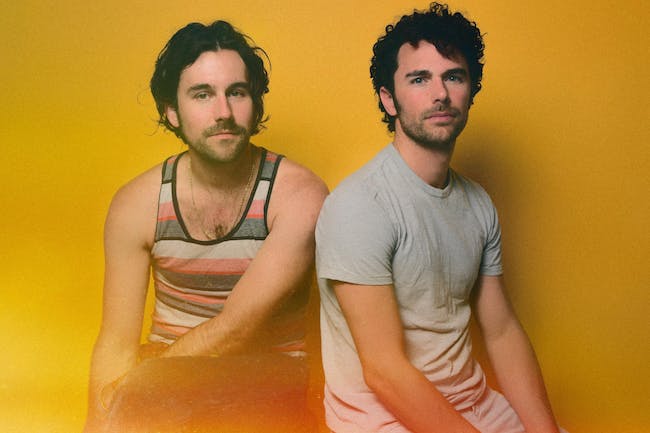 Tall Heights have relentlessly built a career from the ground up. Starting as buskers on the streets of Boston and now performing in packed venues across North America, Europe, and beyond, the duo has distilled their sound in an organic and unselfconscious way. The unmistakable DNA of their music draws on many elements, but the blend of their two distinct voices, in both harmony and unison, is what elevates it and separates it from the pack.

Hailing from the Boston area, Paul Wright and Tim Harrington met each other in their hometown of Sturbridge through Tim’s older brother. The friendship blossomed in high school when they both took up the guitar and began working on music together. It didn’t take long for them to see the potential hidden in these casual jam sessions. As Paul recalls, “Tim transformed from kid brother to musical collaborator over the course of a summer.”

Tall Heights is now set to release two highly-anticipated singles, ‘Keeps Me Light’ and ‘Under Your Skin’, both mixed by Grammy-nominated engineer Damien Lewis. Following on the success of their viral single ‘Spirit Cold’, this new material captures a similar authentic and meaningful energy, but also shows a side we have not yet seen of the pair. The self-produced project, recorded in their simple home studio, captures that raw moment between albums, delivering some of their most honest and heartfelt work to date. Written and recorded in a reflective lull between hectic periods of touring, the new tracks reaffirm Tall Heights’ commitment to a singular sound and an equally rare friendship.

‘Under Your Skin’ rides a wave of ethereal harmony, creating a mesmeric atmosphere of nostalgia. The introspective track, which features additional vocals from Berklee College of Music’s Upper Structure, is a song for the next generation. It was written when Harrington was expecting his first child and completed soon after his son was born. Around that same time, Wright's brother had a daughter too. It was a moment of reckoning for Tall Heights, a moment to peek over the partition into posterity. In their words, “It's a reflection on living. It's about the joy of welcoming a new human into existence, and the heartache of bringing them into a frightening, twisted world. We liked the word play of "under your skin" being both a reference to blood relation, AND how dads get under their kids' skin”.

With ‘Keeps Me Light’, they explore the sense of safety felt in friendship. Even as humankind marches on into darkness, there will always be a safe space in the heart of a friend. The track showcases a rich string arrangement, additional a cappella vocals from Upper Structure, and features Harrington’s parlor-sized resonator guitar, which gives it a bluesy, almost Southern grit. Together, the two tracks give audiences an intimate look at a poignant and potent time in the lives of both artists.

Combining Paul’s lifetime of classical training, Harrington’s spontaneous artistic instincts, and the prismatic union of their unique voices, Tall Heights’ sonic imprint is in a category all its own.

Tall Heights’ recordings have amassed over 275 million streams. They regularly serve as Ben Folds’ backing band, and have toured alongside CAKE, Judah & the Lion, Colony House, and The Paper Kites. They’ve also performed on both Conan in 2016 and CBS Saturday Morning in 2018. ‘Under Your Skin’ and ‘Keeps Me Light’ are due for release fall 2019.