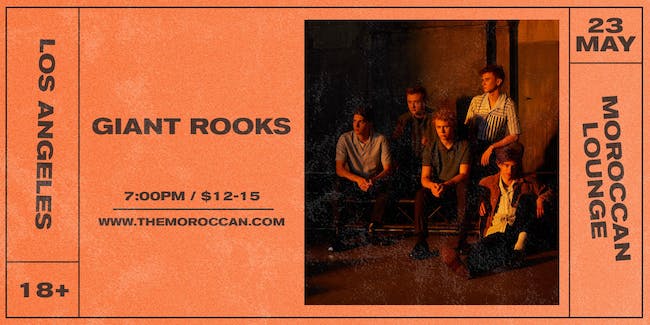 Giant Rooks will embark on a run of tour dates in the United States starting March 2020, thus marking their first tour outside Europe. The band will play 12 shows supporting Milky Chance, and two headline shows in Los Angeles and New York.

In 2015 singer Frederik Rabe, guitarist Finn Schwieters, bassist Luca Göttner, keyboardist Jonathan Wischniowski and drummer Finn Thomas founded Giant Rooks. Since then, the band has taken huge strides, and it's not just the German music scene that considers them indispensable: Whether in London, Berlin or Milan – their enthusiastic concertgoers and fans share the same feeling, mindset – a collective human moment. The Giant Rooks attitude is cosmopolitan, just like their sound. The five New-Berliners in their early 20s write radiant, euphoric pop songs with just the right touch of conscious melancholy.

After the acclaimed “Wild Stare” EP (with almost 50 million streams), the band won the 1LIVE Krone, a major music award in Germany, despite not having released any albums yet. In January 2020 Giant Rooks released the single “Watershed”; a perfectly arranged indie pop song that doesn't hide the fact that it borrows from house and electronic music in its flowing structure, but instead skillfully blends those sounds together.

Apart from the US, Giant Rooks will be touring Europe in the spring. Playing 32 shows in 14 different countries on their upcoming ROOKERY Tour, with 30,000 tickets already having been sold in Germany alone. 2020 will be the year of the Giant Rooks, and the band is inviting you to come along for the ride.